Apartments, holiday & vacation in the Netherlands

Apartments Waterpoort is located near the Markermeer | IJsselmeer and has a beautiful view of the typical low sky of Holland.

All apartments have a full equipt kitchen, bathroom, central heating, sateliet color TV and free WIFI. The parking is free and next to the apartments. All apartments are supplied with bedlinnen and towels.

Located between the old VOC cities Hoorn and Edam it is excellent positioned to start your excursions to Amsterdam, Alkmaar, Hoorn, Enkhuizen, Medemblik, Edam, Volendam, Keukenhof, the beach, or the tulp fields on 500meters flowering in the month april.

There is a bus going every half hour to the center of Amsterdam. 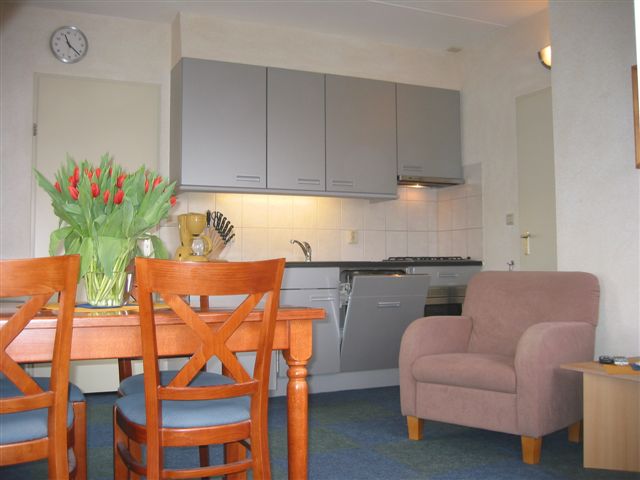 There IS ONE 5-persons apartment
WATERPOORT

In Amsterdam you'll find an interesting combination of past and present. This together forms a unique image of the capital of Holland. Amsterdam is a picturesque town, which is also a great town for shopping. Large department stores can be found in the centre of the town, smaller and exclusive shops in the "Concertgebouw"-surroundings. Where for example well known designers are situated. In "De Jordaan", originally a working-class-neighbourhood that is wonderfully restored, you can browse along the most divergent shops.

Beautiful and chic you'll find at de Amsterdam diamonteers. They are known for their exclusive workmanship. Every year a million visitors amaze themselves about the way they cut raw stones into highgraded and expensive diamonds. Enough to make you mouth water. Amsterdam is the town with the most museums per square-meter in the world. There are forty museums with diverse collections. "Het Spiegelkwartier", de access to the "Rijksmuseum", is the place where you'll find art and antiques. Paintings, ceramic, glass, jewellery, furniture, coins, books, Art Deco, to name a few things. To see the Nightwatch from Rembrandt you have to go to the Rijksmuseum. This artwork is for millions of people an absolute highlight. Besides the Rijksmuseum, Van Gogh museum en the museum along the recently renovated Museumplein, Amsterdam has many special museum. Like for instance the Tropenmuseum, the Dutch Shippingmuseum, the Jewish Historical Museum, the Rembrandthouse and the Amsterdam Historic Museum. In smaller museum real treasure can be found. They are worth the trouble to a visit. In Amstelveen, on the outskirts of Amsterdam, you can see art in Museum van der Togt en the Cobra Musuem for Modern Art. 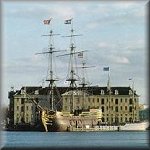 Culture, history and water are for centuries connected top Amsterdam. Where the river Amstel discharges into Het Ij, the first inhabitants established around the year 1200. In the beginning fishing was the main income but was later replaced by trade. At the end of the sixteenth century Amsterdam was Europe's richest town.

The Waterloopleinmarket is a fleamarket known far across the boundaries. A feeling of pleasantness and kindness come across you when you enter the market. Along the Singel you'll the only floating flowermarket in the world. Weekly there are markets for stampcollectors and lovers for old books and prints.

At night you won't have the be bored for a second in Amsterdam. A large number of bars, café's, disco's and nightclubs provide a broad choice in nice things to do.

All musea in Amsterdam